For once I’m actually prompt about writing about my activities. Yes, this is prompt in comparison to my usual style. (Don’t worry, all the other stuff I have done will make an appearance here soon.) But let’s focus on Mexico. Let’s focus on Mexico, because now I’m in Sweden, and while we were gone Sweden got cold. Cold and dark.

That’s neither here nor there, because as mentioned I was in Mexico last month. Evelina and I travelled there to celebrate our friends’ wedding. The details of their beautiful wedding will come in a future post, because now I want to tell you about the adventures!

On Monday we arrived after a relatively successful flight down from Boston via JFK. The first thing we did was receive more information in an hour than anyone can possibly remember when it comes in that quantity. The second thing we did (After gallivanting around our room and taking ridiculous pictures. No those pictures will not appear here.) was go down to the beach. Of course we jumped in the water, all be it quickly. It really sunk in that we were on vacation, being able to walk from our room down to the beach in a matter of minutes and enjoy the Caribbean view. That evening we ate with our friends, and new acquaintances, who would be attending the wedding. After which we returned to the hotel room and enjoyed the amenities there. We were sure to get to bed early because we had two days coming up full of adventure.

#nofilter check out that sunrise!

We woke up early Tuesday for room service and a great view of the sunrise from our balcony. We had a big day ahead of us, so we had to fuel up. Tuesday we had planned to join a day trip to Chichen Itza and Wednesday we had planned to go snorkelling. Clearly we had big plans. And let me tell you, it was worth it. The adventure out to Chitchen Itza was both highly informational and fun. Even though it was entirely possible that our guide was making things up as he went, about 80% of it I remembered from 5th grade when we learned about the ancient Mayans, Incas and Aztecs.

The trip out to Chitchen Itza was an entire day trip, with a side stop at a grotto. We got to go swimming in an ancient hole in the ground. It was only recommended that you stay in the water for 30 minutes. Because of the bacteria. Maybe it shouldn’t be recommended at all that one swim in it. Of course I jumped in. It was worth it. At the grotto there was also a tequila factory, where we got to learn, in very fast, broken English, how tequila was made. Then we got to taste test it. Peanut butter was the best. I tell no lie. In retrospect, maybe you’re supposed to taste the tequila and then go swimming. A little tequila goes a long way, and by the time you’ve tasted all 9 flavors a little bacteria doesn’t scare you!! 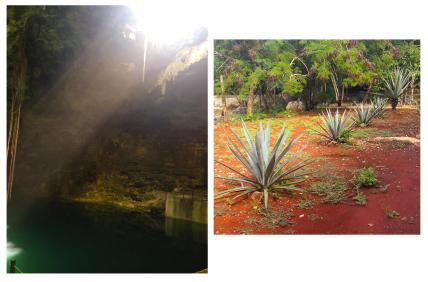 Snorkeling was a real blast. I highly recommend it. Who knew that off the coast of the Yucatan peninsula lies the worlds second largest reef? Bobbing up and down in the ocean waves, catching a glimpse of some tropical fish, trying not to get roasted by the sun, and sipping beer on a boat was a top-notch way to spend the day. My favorite moment included our guide showing us a barracuda. Promptly followed by the bride to be swim-chasing it through the ocean, as the guide frantically points to the fish, to his mouth, and makes a biting motion with his hands. Yes, barracuda bite. No, you should not chase them.

Thursday was wedding day, and what better way to start the day than with some early morning Pilates on the beach. Or at least it would have been a great way to start the day if our instructor wasn’t ab crazy. That man had us do more ab work in an hour than I’ve done in my entire life combined. After that exhausting workout we had earned some pool time. (Plus our glistening abs looked great in the sun.) The wedding that evening was ridiculously beautiful. But as I said, more on that later.

Our first day of full relaxation was on Friday. So we spent it by the pool and on the beach.

Don’t worry relaxing for us includes an intense made up game, where the rules essentially were that you get points by knocking over cups with various amounts of pool water in them with a rubbery ball that is bounced across the water in the pool. Relaxing also includes an hour of volleyball, so don’t worry, we didn’t go overboard.

Saturday was travel day, but we luckily had a good chunk of sun time before we had to pack up and say our goodbyes. We met a group of great people, as well as got to spend about a week with great friends. What could be better? Mexico had a ton to offer. It was a fabulous, sunny, adventure-full week.

Take me back to Mexico.